The Stranglers eh? Back to almost where it all began.

I’ll be honest and admit that I can’t now remember whether they were my second ever concert or my third.

It was them and Rory Gallagher who occupy those spots and I’ve forgotten which way round they were.

In those early days as I’ve mentioned before I was grateful to older friends – and sometimes friends of friends – for letting me tag along to shows I might not otherwise have seen.

The Stranglers at the Mountford Hall in Liverpool was once such occasion when the only punk fan I knew at the time, Martin, was quite happy for me to go with him. He was at Liverpool Uni at the time and the house he was living in was genunely the coldest place I’d ever been up to that point.

While waiting for The Stranglers to appear at Liverpool Academy I thought of Martin again as the between bands soundtrack included White Punks on Dope by The Tubes which he was a big fan of. 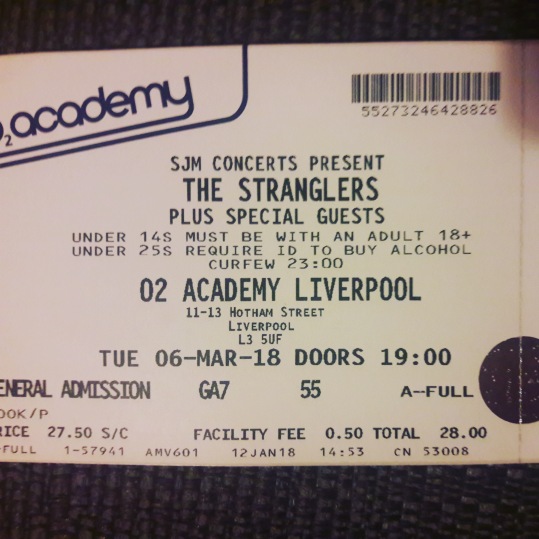 I saw The Stranglers a few times during the 80s but gradually lost interest especially after Hugh Cornwell left, but in recent years I’ve seen the advert for what now appears to be a traditional UK tour throughout March and wondered whether I should go or not.

Thankfully, this year, I decided I should and was treated to something more that just a wallow in nostalgia. Gill went with me for her first taste of the MeninBlack and was duly impressed by what she saw. She also attracted some attention with her Pete Bentham and the Dinner Ladies t-shirt.

With Jet Black now stood down from touring at the ripe old age of 79, the band consisted of just two original members in Jean Jacques Burnel and Dave Greenfield, with Baz Warne handling lead guitar and Cornwell’s vocal contribution.

In Burnel and Greenfield The Stranglers had two musicians who were far too accomplished to be considered as traditional `punk’ three-chord wonders.

And, in truth, their version of punk was much more about attitude than music exemplified by the occasionally provocative nature of their song titles and lyrics.

Plus they became a bona fide pop band for a while and recorded a truly timeless number one hit in Golden Brown which will get airplay for as long as radio exists.

Their set spanned a 40-year career with more modern songs like Norfolk Coast slotting in comfotably alongside their classics like Hanging Around, Grip and the evening’s inevitable closer No More Heroes.

One interesting highlight was the crowd’s reaction to Always the Sun which was treated like an anthem and sung back to the band louder than anything else.

Personally I was delighted to hear the likes of Tank, Nuclear Device and particularly Bear Cage again which were all favourites from 30 years or more ago.

2 thoughts on “Ain’t missing Hugh at all”